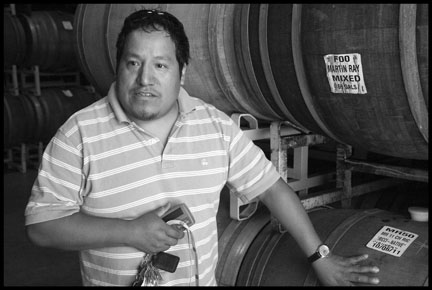 The Story of Alejandro

Alejandro comes from the Triqui-speaking town of Santa Cruz Rio Venado in Oaxaca. After migrating to the U.S. as a boy, he finished high school while still working in the fields, and then went to community college and state university. Today he has a well-paying job in the laboratory of a small winery.

I’m 39 years old. I was fourteen when I left Santa Cruz Rio Venado to come to the U.S. By that time my father already had his papers, so he could cross the border freely. I didn’t have that privilege. When I got here I immediately began to work. It was grape harvesting time, which is a very difficult job. Today I can’t imagine going back and doing that an entire season, but at that time I didn’t have a choice. I needed the job.

We had to start our day at five or six in the morning and my father would drive us to work. Once you’re working, you have to carry the pail in a harness, and cut grapes off the vine at the same time. It was common to cut your hands, but you had to keep going anyway. We had to work fast because we were paid by piece-rate. The contractors and owners had a certain number of tons of grapes they wanted harvested each day, which put pressure on us to meet their quota.

Alejandro
They would yell at us that they wanted a certain number of tons at a designated time. The foreman would walk behind you, yelling at you to work harder and faster and to not to throw away any grapes. If you didn’t work as fast as they wanted, they would tell you instantly that there was no more work for you. I saw that a lot. Many times if someone arrived to work late, they were told to leave. They knew I was just a boy, but the only thing that mattered to them was that I got the work done.

Today I think some things have probably changed, but there are always those contractors that only care about how fast you can work. I think there are still many young workers today.

I worked the grape harvest, and then entered school every December after the harvest was over. I continued to work in landscaping on the weekends. It was difficult, but having grown up the way I did, I was used to working hard. As a young child, I had already worked in the coffee and banana plantations and had the responsibility of taking care of our farm animals. When I arrived here, I already knew what going to school and working entailed.

A worker prunes grapevines in vineyard
I liked school, but I was very behind the first two years. I didn’t know which classes to take or how to prepare for college. It wasn’t until my third and fourth year in high school that I figured things out.

We spoke our indigenous language, Triqui, in our family at home, and I only really learned Spanish when I came to the U.S. I knew very little before that. I could read and speak Spanish enough to get by, but I didn’t really know how to write it. My secondary schooling in Mexico was in Spanish, so I knew enough to take the exams. But I was very hesitant to speak Spanish, which made it difficult to learn the language. I felt isolated and embarrassed about speaking Triqui, because we were ridiculed by other students. There were no Triqui teachers. They would call us Indians, which was considered an insult.

I graduated from high school picking grapes and working in landscaping every year. I always worked, but I always wanted to continue my education.