The Story of Consuelo

Consuelo has worked at Brokaw Nursery for 41 years.

Before I came to work at this nursery I harvested strawberries, tomato, cabbage, parsley and spinach. I did that three or four years, right after I got here from Mexico. I was 23 years old when I came to work in the U.S. Then I moved to this job 41 years ago and never left. 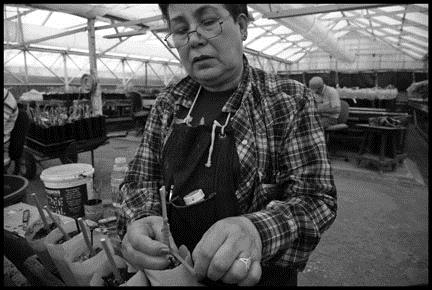 I got a job indoors and my husband went to work in their fields. I’ve been here and have never been unemployed ever since. I think they see me as a good worker.

I graft citrus and avocado trees and then plant them outside. It used to be that most of the avocado trees were grafted and planted outside in the months of June and July, after planting the seeds in November. We had to work in the rain and wear rain boots. We worked partially indoors and outdoors. After further experimentation, we found the avocado trees did better when planted indoors first. We experimented with various methods. I have had many jobs here and I’ve been able to do each one with the exception of carrying the grown trees on the semi truck.

I consider myself a skilled worker. I have a little knowledge of everything. I know how to graft citrus, plant citrus, tie citrus, graft avocado and tie it, fill cups, rubber band the plant and inject hormones. I know how to do almost every job. I know all aspects of the nursery work, which is a reason why I’m still here. I’m a little of an expert in almost everything. They’ve left me to do my job and they see the kind of work that I do. But I also believe that when a person is kept on that long it is not only because of experience and knowledge. There is a sense of respect. If there weren’t, then they wouldn’t care that I do good work; they would simply let me go. This job is very different from picking strawberries, what I did before coming here. This is meticulous work. I have had to learn a lot here and I think that’s another reason why they have kept me on. 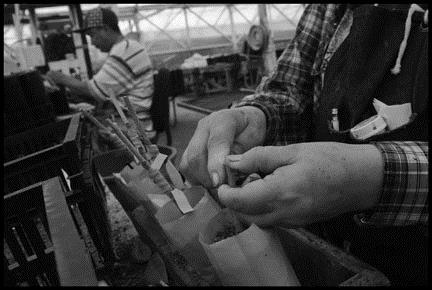 I know the difference between living and dead plants, and I put sticks in each plant to distinguish varieties. If I didn’t know how to distinguish one plant from the next by now, then I wouldn’t have learned anything. Obviously we all make mistakes, but we have to know what we are doing. If I am grafting, avocado, kiwi, citrus fruit, mango, or cherimoya, then I have to know what I’m doing.

Some tasks that need more experience, and cannot be done simply with a month or two months of work. Most of the work takes a lot of experience and knowledge. One of the easiest tasks is washing and placing the seeds. Knowing how to graft and recognizing one plant from the other takes a lot more time and experience. There are so many varieties of avocados, like Haas and Pinkerton. One must become familiar with the different varieties and know one graft from another.

First one needs to learn and then comes speed. Now there are many people here who work quickly — not physically, but who can move their hands rapidly. Everyone who comes here learns on the job. To stay you have to be a skilled worker, but you have ample opportunity to learn. You also have to have manual dexterity, and know what you are doing.

For example, see how I cut the grafts. I cut the plant here, and connect with another so that it grabs the side of the cutting. The cut is about an inch long. Then I grab the rubber band and wrap the grafted plants tightly together. Then I label the different plants with sticks. I also brush on a kind of sealant that helps attach the plants and prevents them from drying. 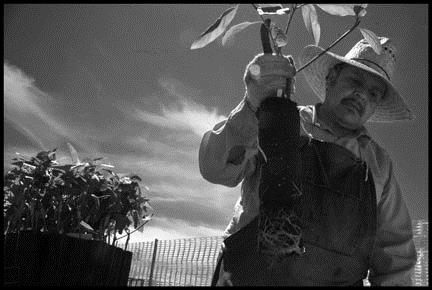 Now my problem is that my fingers hurt at the end of the day. I think I have arthritis, because I work in a place that’s so hot and humid. I wash my hands constantly because the plants are dirty and may carry bacteria.

I work year around. I have been working here 40 years and have never been laid off. I think one reason is that I have seniority. Another is that I’m seen as a person with skill. They had patience with me and have taught me, and I’ve learned a great deal here. 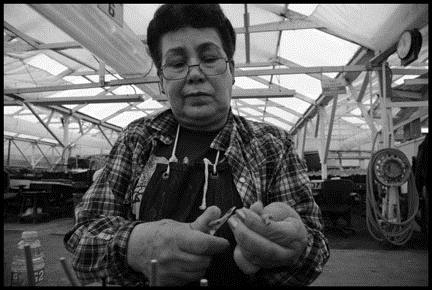 In my life I’ve given birth to eight children, but I only have four who are living, three sons and one daughter. Three died. I had one set of twins, so there were eight children total. The oldest is 48.

This job has been a very good way to support my family. I began when the hourly pay was very low. I didn’t have the knowledge to work with computers nor do I have office skills, so this was the type of job that I could do.

My youngest son finished high school and went to college and is now a telecommunications engineer. My daughter works in accounting. Another son is an upholsterer and the last is a mechanic. They have all done well.

I had health care for my children when they were young, because my employer provided medical insurance. In the beginning we had to pay part of the cost, but then it became free when the United Farm Workers Union came in. After the union left, the employer continued to provide medical insurance. When my 13-year-old son died, we already had this insurance and it covered approximately 80-90% of the costs. It didn’t cover 100% because my son exceeded the $100,000 limit. But thanks to that insurance we were able to move forward.

I think this kind of insurance is essential for a farm worker family, because medicine and doctor visits are so expensive. It’s a necessity. I am taking medicine, about eight pills a day. I take medication for high blood pressure, cholesterol, arthritis, calcium for my bones, iron and another vitamin. I have too much medicine. I have been on blood pressure medicine for about three or four years. My children don’t need medication because they’re young, but I’m old.

That health plan was necessary to continue working. Here they provide many things that we wouldn’t have if we just worked in the fields, like medical insurance, vision, dental, holidays and paid sick leave.

The union was here nine years, nearly ten. After the UFW left, the company kept everything the same. They actually provided medical insurance before the union came along, but only foremen were offered it, and they had to pay if they wanted it extended to their families. The other workers weren’t offered insurance. Now we have it, although it’s just for permanent employees. They provide us insurance, holidays, sick leave, dental and vision. Before the union, we had paid holidays, but no insurance. 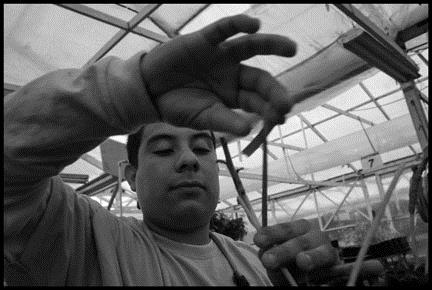 We’re also working for the health plan coverage. A health plan, even from the government, is expensive. Here I get it a little cheaper. Right now we are paying a share of the cost, and I pay for my husband’s coverage.

When I emigrated I knew I would work here, but I had never worked before. I was young and raising my children. After I arrived, I went to work in the strawberry harvest. I asked my husband if there was something else I could do because I got very tired. I did it for two or three years, but couldn’t do it after that. My husband was running an upholstery business, but that didn’t pay very well, so he worked alongside me in the fields to make extra money. I couldn’t drive and didn’t know how to speak English. I never thought I would be working in the fields and that the work would be so hard. But I don’t regret anything. I feel we have been successful.

The owners of the nursery have been very good to all of us, especially the owner’s wife. They lent us money when we needed it, and would just subtract the payments from our checks. They never charged us interest. We were very thankful. If they knew we couldn’t pay for our children’s medicine, they would offer us financial help. They even lent money to purchase vehicles. They were involved in our lives and knew what we were going through.

If immigration reform passes, I think my employer will do what they can to help those workers who come from the agency, who aren’t permanent. When individual workers have applied for legal residency, the employer has always provided them with work related documents free of charge. The owner’s wife and their eldest son, who now runs the business, are very conscientious people.