The Story of Elisa

Elisa is a leader of migrant Mexican farm workers and her husband works in the fields. She has helped organize a movement among farmworkers living in trailer parks for better conditions and basic services.

Unfortunately, there aren’t many housing options for farmworkers and trailer park operators profit from that situation. They rent or sell these dilapidated trailers to farmworkers. These types of communities are called “ranchos polancos” — trailers without city permits that don’t meet local dwelling codes or laws. Because none have permits, the trailer park owners take advantage of them, and workers often do without electricity, an appropriate sewer system or have to live with contaminated water. You can’t do anything about it, because the owners threaten to contact the county or immigration officials if you complain. 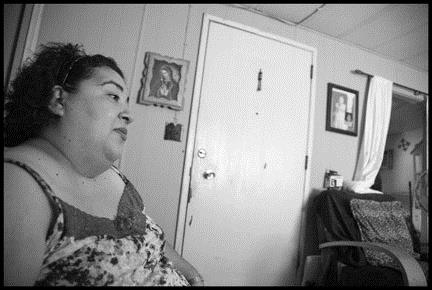 I’ve met people who have told me they’ve been without electricity more than four months, and they didn’t want me to say anything out of fear. It’s hard to comprehend how we can be treated like animals. On second thought, animals are treated better. If they were to find a stray animal in the street, they would pick it up, give it water and food and take it to a shelter. These people lived without electricity for months and nobody even bothered to see if they had clean water. How is it that a third world community can exist in a first world nation? How is this the golden state? It’s a dead end street.

Before coming here, I lived my entire life in Mexicali, in Baja California I grew up there, and went to work for a computer company, taking care of their billing and exports. They sold ready made computers and built their own. My parents also owned an electronics business. I studied technology in school and serviced printers. Even though I had a good job, the wage was very low. My mother was diagnosed with cancer and I needed to earn more. So I decided to cross the border.

It was a hard transition. It was a real shock when I arrived. I had been coming to the U.S. since I was young, but as a tourist. I would go to Disneyland and to the mall. I never imagined a place like here existed in California. I had only seen the beautiful parts, like the beach.

My first day in the fields was terrible. We finished work at 3:30 and I don’t even know how I got in the car and back home. I remember showering and dirt coming out of places I didn’t think it could come out of. I had an allergy attack, fever, diarrhea and vomiting.

Many local jobs don’t pay an hourly wage, but piece rate. My husband isn’t the fastest worker, so on a good day picking lemons he makes $30 a day. He works eight to ten hours a day. What am I supposed to do with $30? I try to make miracles! 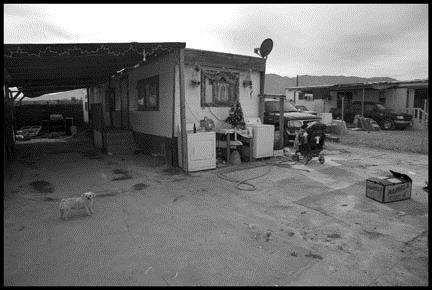 But it’s difficult living on my husband’s wage of $8.15. I have a daughter and my parents also live with us. We’re a family of five living on one salary. Everything is so expensive. I buy fruit, yogurt and milk, but only my daughter can eat and drink it. Because my parents are both diabetic, some food is strictly for them. Because my husband is the one working in the fields, there are drinks and food that are strictly for him, like Gatorade. We’re very limited in what we can eat, especially during the off-season. We don’t eat meat every day, only a few times a week.

We also buy a lot of medicine because my parents are diabetic. I was gravely ill and hospitalized, so I need upwards of $200 a month in medicine. There are times when I see the doctor on the 2nd or 3rd of the month, but I can’t pick up my medicine until the 15th or the 20th. I’m talking about strong pain medication. I sometimes don’t take the dosage that the doctor recommends so that it will last longer.

Cesar Chavez and Dolores Huerta both said, “Si se puede.” Even though many people here speak different dialects and come from different places, we all have the same values. I want my daughter to know that even though she grew up in these trailer parks, she doesn’t have to live her entire life in these conditions. I want her to see other horizons. I want her to know that she has a responsibility to help others. We’re a forgotten community. We’re invisible. We contribute to this country and should be protected by human rights everyone else in this country enjoys. We put the food on the table for everyone. 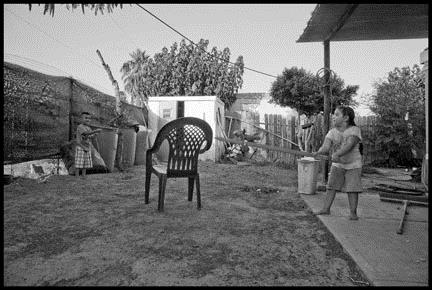 Children play with a broken piñata in a farmworker trailer park.