The Story of Miguel

Miguel comes from the Triqui town of Santa Cruz Rio Venado in Oaxaca. He brought his family to live, first in Oregon and then in California, and has worked in the fields for twenty years.

When I first came I went to Oregon and harvested strawberries, cucumbers and blackberries. It was hard because we were paid by the pound when harvesting strawberries and by the bucket when harvesting cucumbers — not by the hour. I earned about $300 a week. If you didn’t work fast, though, you couldn’t earn that.

When I first came alone, I couldn’t rent an apartment. I lived under a tree with five others. We lived next to a ranch, but they didn’t have any available rooms. It rains a lot in Oregon, and there we were under a tree. The blankets got wet, but we managed to go to work the next day.

After I brought my wife, we rented a room. At first my children stayed back at home in Oaxaca. We only had work for three months each year. It wasn’t a good situation, because there was so little work and hardly any money. With three months work we had to support ourselves, plus our kids back in Oaxaca, for the next nine months that followed. We had to save enough money when we were working to pay the rent when we weren’t. Otherwise, where were we to go? There was enough money for food but nothing more. We wanted to buy other things, but there was no money because we had so little work. 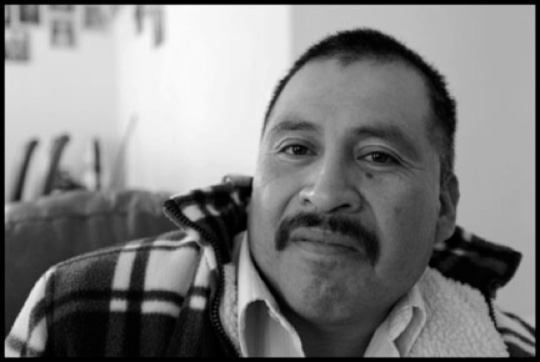 In 1998 I came to Greenfield looking for more work. There were no families from Oaxaca when I first arrived. I didn’t know how to rent an apartment, so I just moved in with someone. My daughter had already been born in Oregon by then, so in Greenfield I looked for a place for my family, but I didn’t know how to go about it. At first we rented a room, but since my newborn daughter cried a lot, our landlord told us to leave.

Finally, I rented an apartment. Then we moved to a different apartment, where we stayed for the next ten years, sharing with another family. Six of us lived there.

In Greenfield I started working the lettuce harvest, and did that for ten years. The lettuce crop is a longer harvest, about six or seven months, so then I didn’t work for the other five months. I was able to save more money that I could in Oregon. In 1998, I was earning $5.50 or $5.75 an hour. 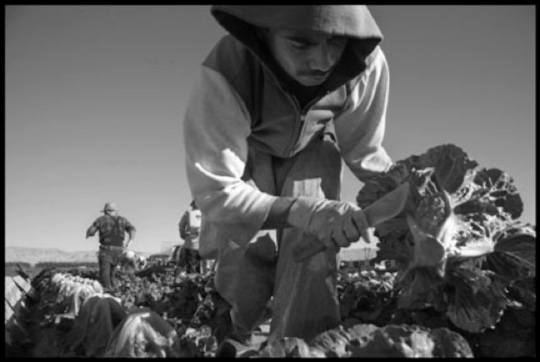 I did it for ten years and then I was done. The harvesting begins at night, so I started my shift at three in the morning, which means I had to leave my house at two. My wife had to get up at one to make me my lunch. That is what the company required — begin work at three and go until you’re done. We worked in the dark, but there was a light on the machine so that we could see. We worked ten hours, until one in the afternoon. But there were times they made us work twelve hours, which meant we didn’t finish until three in the afternoon. We were paid overtime after ten hours.

Sometimes we were required to work past the twelve hours with no additional break. The tractor-trailer has space for twelve bins, and if it wasn’t completely full of bins, we had to work to fill the tractor-trailer.

My wife and I both worked the lettuce harvest for ten years, but I couldn’t take the early hours anymore. I would get home at three in the afternoon and have to go right to sleep in order to get up early the next day. My children didn’t even know me because I would go to sleep as soon as I got home. It was hard to care for them properly. We had a woman we knew babysit our children. We would drop them off at her house early in the morning and pick them up after work. We paid her ten dollars a day, which for us was a lot of money.

I couldn’t do that another ten years, so I decided to look for work elsewhere. I started working in the gleaning [going through the field picking what’s left after it’s been harvested once already]. There weren’t enough hours of work, though, so now I’m working the cabbage harvest. I work from six in the morning to four in the afternoon. When I started it paid $8.50 an hour, and went up to $8.75. Women don’t work in the cabbage fields, so my wife went to work cleaning houses. Fieldwork pays very little, so my pay alone wouldn’t cover the children’s school expenses and our rent. My wife and I both have to work. The contractor I work for now hires a variety of people, both Triqui and Spanish speaking people. 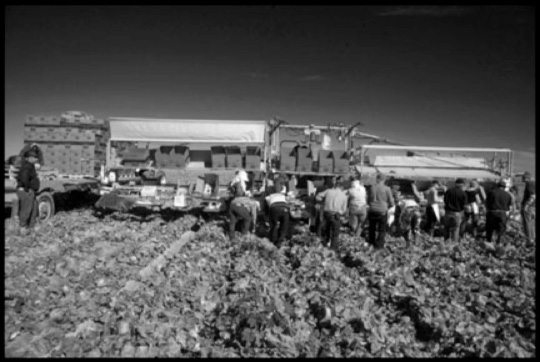 Working behind the machine cutting lettuce.

In addition to low pay, there are a lot of contractors out there that don’t allow workers a break at the required time, or even a break at all. At work I want the contractor to consistently let us take breaks at our scheduled times of 9:00 a.m. and noon. There are many contractors that don’t rehire us if we don’t work the way they demand. They speed up the machine and we’re expected to keep up.

Workers organized a strike at the pea fields two or three years back to change those conditions, but I don’t believe they have seen lasting change. When there is a strike, conditions improve for a few days, but then things go back to the way they were.

Most of us live very tightly crowded in apartments here. Many people usually share a typical three-bedroom apartment. One family usually shares one in room in an apartment. I too have been extremely poor, but thanks to the Lord, I now have enough for a home. I never planned on purchasing a home, but as I continued to work my wife and I began to discuss that possibility. Finally, we were able to do that.

I don’t think I’ll go back to Rio Venado in Oaxaca to live, although I might go to visit my two sisters who still live there. It is a very economically depressed area, so I only want to visit, not move there. 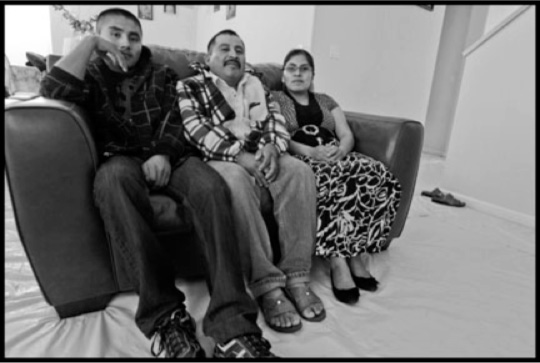 Miguel, his wife Rufina Mateo, and one of his sons.

I hadn’t thought of what my life would be like when I was crossing the border. My plan was to work here and then return to Oaxaca. But my life turned out to be better here. My son was attending school in Oaxaca and I knew he was very intelligent, so I returned home to bring him. He entered high school here, and is now a year away from earning his engineering degree. I think he’ll get a good job here and stay. I believe my children will have good jobs here. My other son is attending community college and when he graduates he’ll go to a university. Another daughter and son are here in high school.

I work in the fields and earn $8.50 an hour. I hope my children will be able to have better jobs.