The Story of Lorena

Lorena is a young farm worker and single mother from Oaxaca. She lives with her daughter and aunt.

To go pick blueberries I have to get up at four in the morning. First I make my lunch to take with me, and then I get dressed for work. For lunch I eat whatever there is in the house, mostly bean tacos. Then the person who gives me a ride to work picks me up at twenty minutes to five. We call him the ritero, which means the ride. To be honest, I don’t know them very well, but they pass by the house to pick me up. I work as long as my body can take it, usually until 2: 30 in the afternoon. They give me a ride home and I get there by 3: 30 or 4 in the afternoon. By then I’m really tired. 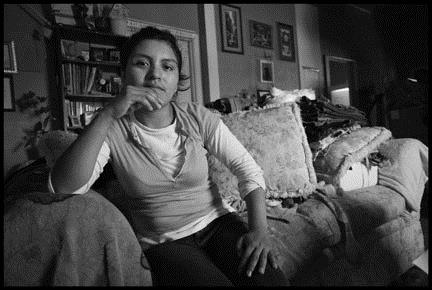 The driver charges me eight dollars each way, to take me to work and back home. Right now they’re paying six dollars for each bucket of blueberries you pick, so I have to fill two extra buckets just to cover my daily ride. I met the driver because the contractor I work for finds us rides. The contractor has about fifty of us farmworkers picking blueberries for him.

I first worked for the contractor putting plastic over table grapes. Then we went to pick blueberries. This year I just started doing the blueberries. On that job we put pieces of plastic over the vines so that it looks like an igloo. They do this so the grapes won’t burn from the frost. That work lasts about a month. The grapes are almost ready to pick when we do this, but we don’t pick them. Other people come after us to do that.

I’ve never picked table grapes myself – just the grapes they use for making raisins or wine. I do that with another contractor. I’ve worked with many contractors doing many different jobs. Sometimes I work a lot with the same contractor, but sometimes it changes — it depends on the person. Whether we only work with one or with many different ones — that’s up to us. It also depends on what type of work is easier. To me the contractors are all the same, but some treat us better than others, so we go with them. Many contractors also only work with men. 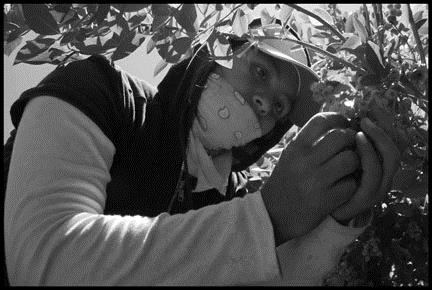 For me, it depends on what benefits me most and what type of work will allow me to make enough to pay for my lunch, ride and rent. I have a daughter, Liliana, who’s four, so I also have to make enough to pay for the babysitter. I have to work and I have to support her, which is why I’m picking blueberries. I pay the babysitter weekly — she charges me eight dollars a day. Lately, since my aunt isn’t working, she takes care of Liliana.

My daughter’s still asleep when I go to work, because we leave so early. We start working at six, so I sleep on the way myself, and wake up when we get to the field. There the contractor gives us our buckets and we wash our hands before picking the fruit. The job isn’t that difficult to do, and I love seeing the buckets fill up rapidly. We know how many buckets we have to fill to have a successful day. At the end of the day I’m really tired, but I think that’s also because of the heat.

We have to be careful not to pick the green ones or red berries. They don’t like those. The workers packing them in the shed let the owner know if there are a lot of green and red ones. If that happens, it’s brought to our attention. Right now there are a lot of blueberries on the plants, so we can make more buckets. Sometimes we return to a field as many as four times. First we pick the ripe blueberries and then go back, because the green ones continue to ripen with the heat. 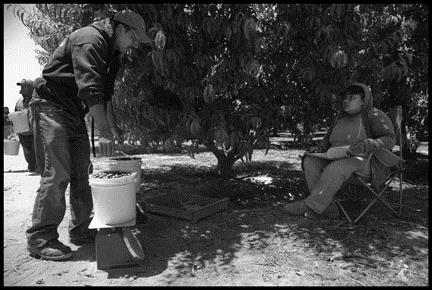 The checker weighs the buckets of berries picked by a worker.

They pay six dollars a bucket, and each has to weigh twelve pounds. This is the second year I’ve picked blueberries. Since I don’t have much experience I can only do fifteen or sixteen buckets. Those with more experience can do up to twenty buckets a day. But when the ripe fruit is scarce, I can only pick thirteen. It depends on how many ripe blueberries the field has. To pick a lot, you also have to skip your lunch break.

After a day of picking blueberries, my hands feel tired and dirty and mistreated. Our bodies are hot from working all day and we immediately wash our hands with cold water. Later my hands hurt a lot. They don’t give us gloves because they say they will damage the fruit.

A woman weighs the buckets. She has been very good to us. She is fair across the board and doesn’t give preferential treatment to anyone. The owner didn’t want to put anyone in this position who was related to the contractor, so that preference wouldn’t be given to certain workers. The contractor told me that he works directly with the owner. He’s been good to work for — he always has water in the field, and all is in order according to the law.

The contractor I work for is one of the better contractors. He’s a very nice man and very relaxed. He respects the rules, and everything is always on the up and up. He jokes around with us, but he does his job. I joke with him too.

There are some contractors who know how to treat their workers and others who don’t. That’s when you change jobs, when you see how a contractor treats you. Some only need men in their crews, so we women have to look elsewhere for work. We know how contractors are because of what other workers tell us, so we avoid the bad ones.

In general, the contractors I’ve worked for have been fair. They have many years of experience, and therefore know how to treat and talk to workers. As workers, we understand when we’re doing something wrong, so sometimes the foreman has a valid reason to bring something to our attention. But they are not permitted to scream at us.

My first job was picking grapes. My aunt showed me how to pick cherries and blueberries and that’s how I’ve learned to do everything I do now. We’ve picked many different crops and have worked for good contractors. So here I am, working in the fields because it’s the only job there is for someone like me. 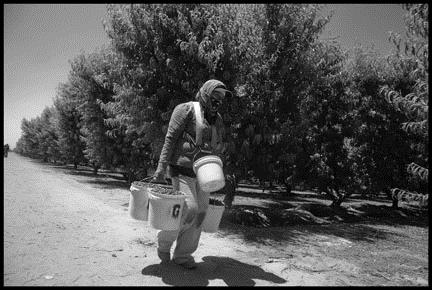 A woman carries four buckets down to the scales.

Like everyone else in my hometown, my parents worked their cornfield so that we could eat. I didn’t like that work, so they never took me with them. I never liked working in the fields in Mexico. When I call them, they laugh at me now and remind me of how I never liked to work in the fields back home. And here I am, picking blueberries and tomatoes. They ask me why I refused to work with them and now I’m here working for someone else. Oh well, it’s the only job I know how to do.

I’ve been working since I turned eighteen, and now I’m twenty. I really didn’t want to turn eighteen, but the years kept passing by. It was scary for me, because I knew things wouldn’t be like they’d been before. It was a difficult transition, but my aunt was always with me. Thanks to her, I learned new skills.

Truthfully, I was afraid because I didn’t have any idea how to do the work and I knew I would be working in the heat. When I received my first check, I knew I had to continue working to earn that type of money. I began to work really hard and I was invited to join other crews and pick other crops. When I’m invited to join another crew now, I know how to do the job. I’m very happy because I work in the fields with other people. Even though I’m tired at the end of the day, I de-stress and love the work I do. I’ll continue to do this work for as long as I’m in this country.

We’ve picked cherries, blueberries, grapes, tomatoes and figs. Picking tomatoes has been the hardest for me because of the buckets you have to carry and dump in the trailers. They’re very heavy and it’s very hot outside. You run all day long, competing with other workers. You can’t allow them to work faster than you, because then they’ll fill the trailer quickly, and you’ll have to go even faster to catch up to it. Some workers have been doing this around four to eight years, so their hands move faster. You always are trying to catch up to them. It’s very hard on your back and many people end up with permanent back injuries. It’s a very hard job, but you earn good money, and get paid according to the number of buckets you fill. First timers like myself earn anywhere from $60 to $70 a day. 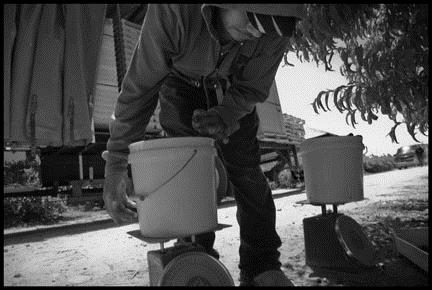 I like to pick tomatoes also because our day ends early. We’re done at about 10 or 10:30 because after that it’s too hot to do the work. But every year you hear about workers who faint because of the heat and some even die. You’re in danger of fainting if you’re working too fast in the heat. It’s important that we have water, but you can’t drink too much of it. When I first started. I drank a lot of water and I felt like I couldn’t stand back up. The contractor sat me down in the shade and gave me a salt tablet. I felt like I was going to faint, but they put me in the shade just in time.

Then in November work is scarce, so we rest. The pruning season begins in December and ends in January, but I don’t like to do it because it’s so cold outside. They just pay eighteen cents a vine, so after paying everything I would make about twenty dollars a day. That’s not enough to pay for the ride and my babysitter, so I prefer to stay home with my daughter, and start picking fruit in March. We don’t work for about three months during the year. I can’t get unemployment benefits, so those months are very difficult, but it is better that I don’t work. When I’m working I manage my finances and save some money, so it gets me through those months. 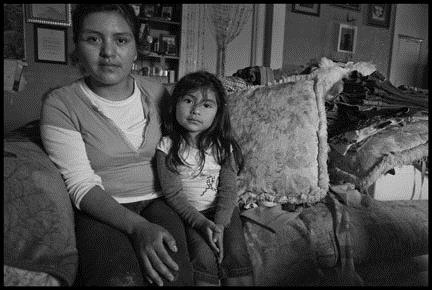 Lorena and her daughter Liliana.

I really don’t have a vision of my own future yet. I haven’t really thought about it. I know I want to work every day. I don’t really have friends, just acquaintances from work. They don’t have responsibilities like I do, so they go out on the weekend. They share their stories with me because since I have a daughter, I don’t go out. I just stay at home. I wash my daughter’s clothes on the weekends because during the week I’m so tired. There isn’t time to clean the house during the week either. That’s what I do on the weekends.