The Story of Marisol

Marisol is a farm worker and single mother from Mexico. She is vice-president of the local chapter of Lideres Campesinas, a farmworker women’s leadership and outreach group.

Working in the fields I earn $300 weekly before taxes. I’m left with $280, and out of that I pay $30 for my weekly ride and $10 for babysitting. So to pay the rent here takes about two weeks of work. 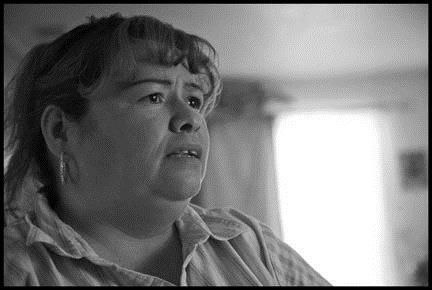 I’ve picked grapes, and worked in the date palms, lettuce, broccoli, radishes and onions. I work all the seasonal fruit harvests. In November we pick lettuce and that carries into January. From there we pick onions, radishes, cilantro, and chile. That ends in April. In May we pick grapes. After the grape harvest we pick figs in June and July. After the fig season we’re home, because there isn’t any crop to pick. Then there is no work for four months. We stop working in June and pick up again in November.

Before those four months without work I try and save as much as I can, and when I’m not working we have to limit expenses. If the kids or I can go another year without buying new shoes, then we do that. We go to food banks. 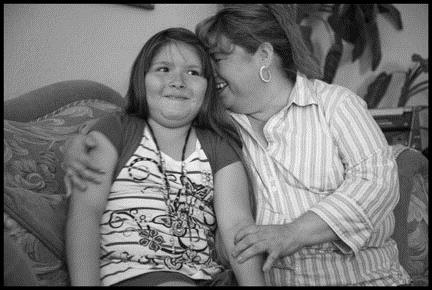 Marisol and her daughter

I’m a single mother, and I have two children. One is eight and the other eleven. The school year begins when I’m not working, so I’m always aware of which non-profit agencies are giving away backpacks or school supplies so that I can get them for my children. My electricity bill comes to approximately $200 when I am not working, so that is a huge burden as well. That is when I buy corn and sell it as a street vendor.

The children feel bad at times, because the popsicle vendor comes around and I don’t always have a dollar to give them because that dollar needs to be saved for the rent, the babysitter or my ride to work.

When I only had one child, I tried following other crops during those months, but it’s too hard on the children. I have to wake them up early and take them to the babysitter, who they don’t really know. You don’t work comfortably because you’re always wondering if they’re safe. And you don’t end up with much money. I have to pay rent back home and in the place where I work on a temporary basis. That’s why I prefer to sell corn in the street instead of leaving my children to work in another town. Once the harvest moves out of town, I just stay put.

I also work in the date palms in May. We’re lifted onto a machine that resembles a forklift with a basket so that we can cut off the small dates and leave room for the other dates to grow. When we’re up in the basket we have to look for the small dates that have brown spots. Those will not grow and we have to cut them off. If it’s our first time, the foreman goes up on the basket and shows us which ones to remove. He just shows you once, and if you still don’t do it correctly, then you’re told there isn’t enough work for you and he lets you go. I do get scared and I have diabetes. My legs tremble, but I always think of my children and how much we need the money. I have to support my children and they give me strength. I try and not look down because if you do, you get dizzy, especially in the heat.

Later the dates are harvested and packaged for sale, but I don’t work in the packinghouse. They already have their workers. The date crop is a year round job for the workers packing it, because they freeze it after we harvest it, so they always have packing work.

A grape worker packs grapes in plastic, and then into boxes.

In the grapes we always work in pairs. One person picks the grapes and the other packs them in the box. We mostly take turns doing both jobs, but if one worker is very fast at packing, then she does that job all day. The foreman gives us our scissors, a large plastic basket and a cart. We pick the grapes according to the way the foreman wants them — sometimes on the green side and other times more ripe. If you’re the one picking, then you also have to pick out the rotten grapes, so that the one packing them can work faster. They pay by the hour but we get a bonus, which this year is twenty cents a box. If you’re a fast worker, you can fill seventy to eighty boxes. If you’re paired with a slow worker, you may only fill 45 boxes. The person picking and the person packing split the bonus.

Currently I earn from $280-$300 a week picking grapes, but at its highest point I earn up to $400 a week. I think it’s a low wage. By law they pay us at least minimum wage. It’s hard work because the foreman constantly rushes us. He tells us we’ve been working for a long time, but that we’ve only picked a few boxes. He comes by and checks our boxes, and if he doesn’t think they’re filled to capacity he sends them back to us.

I never have the same partner packing grapes — it’s always someone different. If they pair me with someone and we work well together, then they keep us together all season. If I get stuck with a slow worker, I approach the foreman and he will sometimes move her. Some women quit because they don’t like the foreman rushing them, the job is too hard or they get too dehydrated. They give us another partner in those cases. 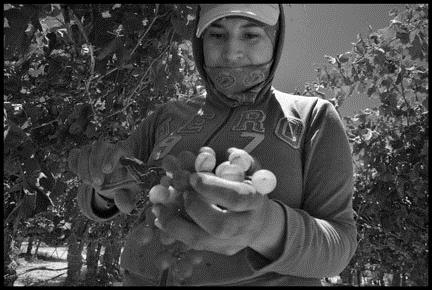 Many workers have died in the fields due to dehydration or illness. I have seen men and women faint. I was picking chiles once and a woman worker told the foreman she didn’t feel well. The foreman took her out of the field. Three days later it was 115 degrees out and another young woman, just 21 years old, fell ill. The foreman told her she had probably stayed out too late the night before partying or she was pregnant. We gave her water and told her to rest, but we kept working. When we returned we saw the ambulance taking her away because she had fainted. She was young, but we’re older and know better. I used to get sick like that when I was younger.

There is nothing like medical insurance. And if you lose your scissors or basket, they discount them from your check. I don’t actually know how much the scissors cost because I never lost mine. The foreman is always reminding us that if we lose our scissors, we pay for it.

I would like those people that criticize illegal immigrants to come and see how hard we work. I would like them to see how we harvest the fruit and vegetables they eat. It’s so easy to discriminate.

I have a hernia the size of a watermelon, because of the heavy lifting that I do. But I don’t have health insurance so I can’t be operated on. I just work like that. It hurts but I take Tylenol or Advil to work and try not to eat a lot or drink soda. When it gets inflamed its difficult to even walk. If I take some medication it feels better. I have to be very careful but my need to provide for my children makes me forget about myself. We even put our life in danger for our children.

Doing this work I have to leave my children with a babysitter and they don’t see me all day. Then I get to the field and have to deal with an unjust foreman. They don’t put themselves in our shoes; they fire us and don’t even think how it affects our family.

I think there can be changes. I think it’s possible if companies are fair. Foremen need to be told how to treat people. They can also help workers economically If the companies here would educate the foremen, they in turn could teach us new things. But if they aren’t trained, they don’t even know how to treat others. There are times you don’t even want to get up in the morning and go to work because you despise the foreman. 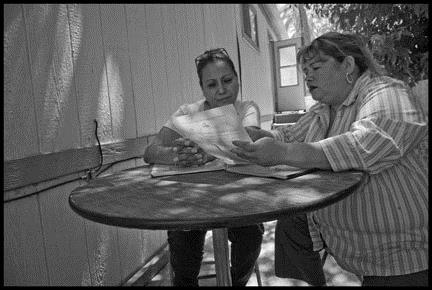 Marisol and her colleauge from Lideres Campesianas plan their next campaign.

I’m the vice president of Lideres Campesinas. I try and help. It’s not a paid position, but I like to do it because when I needed help, my community was there. There are many women who suffer domestic violence. As if working in the fields wasn’t difficult enough, they then go home and get beaten. I tell them about the different services available to them.

We just did a workshop about diabetes, cholesterol, and high blood pressure. Medical personnel came to the trailer park to perform examinations. We have had free mammograms here. The medical resources we bring to the trailer park really help. We farmworkers only seek medical attention when it’s already too late. There are many of us with diseases like cancer. We live next to fields where they constantly fertilize. In time health issues arise due to the pesticides. I’ve called county officials because the stench left behind after they spray is unbearable. The smell penetrates in our home and clothing and when the children stand at the bus stop they always begin to cough. Many children have asthma. When I called the county, they told me they had to use pesticides because the trees needed it to grow. The county is more preoccupied with growing crops than with the negative effects on people.

Sewage is also a problem here. It doesn’t drain properly and the entire parking lot overflows. When we call the county, they come and attach a pipe that then lets the waste flow to the palm trees. We always joke that the palms are going to grow nice and strong.

I’m worried about my children since there are date palms all around this area. I have talked with community members about this, and they are worried too. When the truth came out about high levels of arsenic in the water, we attended community meetings where we learned about its effects on humans. We’ve learned that pesticides are linked to cancer and asthma. Will our children grow up to have cancer?

We work in the fields for low wages. Look at where we live, in a trailer park because that’s all we can afford. We have water, security and vandalism issues. I think that if we had better working wages, we wouldn’t live here. We would live in an apartment because we obviously don’t have money to buy a home. Our life here is more difficult. If we lived in an apartment, we would have air conditioning and live better, but it would cost more. As long as we continue working in the fields, this will be our life.