The Story of Javier

Javier recently graduated from high school after working as a farm worker since he was in elementary school. He has become an activist and continues to work in the fields.

I was born and raised in California. Growing up in a farmworking family — well, it’s everything I ever knew. Whenever I got out of school, it was straight to the fields to get a little bit of money and help the family out. That’s pretty much the only job I ever knew. In general we would work on the weekends and in the summers. When I was younger it would be right after school, and then during vacations.

My sister Teresa slept in the living room and one night when I was doing my homework at the table, I could hear her crying because she had so much pain in her hands. My mother and my other sister complained about how much their backs hurt. My brother talked about his back pain as well. It’s pretty sad. I always hear my family talk about how much they’re in pain and how’s it’s impossible for me to help them. 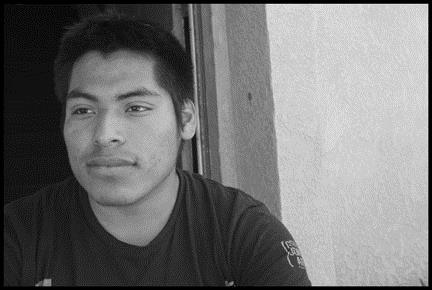 I always moved. In my high school years, I moved six times. In junior high I moved three times and in elementary school I’m not sure. I went to six different elementary schools. We’d move because the lease ended and we couldn’t afford the rent, so we tried to look for a cheaper place. 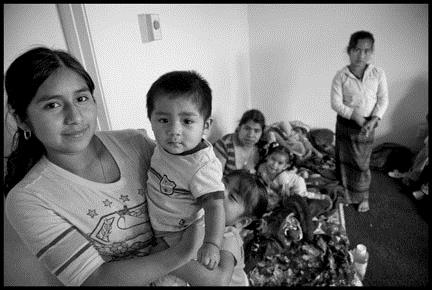 A farmworker with other members of her family in one room in an apartment.

It’s hard sharing the bathroom with so many people in the house. They try to kid around about it. I remember I was always a morning student, so I would wake up and take a shower. My older siblings would tell me to get out because I already had a huge line waiting for me to finish. It was always in and out, flush after flush. In the morning people are rushing to work so they try and make the best out of it. Plus you can’t be late or you lose your job.

The first time I worked in the fields was when I was seven and I picked cucumbers. It was summer. The foremen never said anything because my brother knew them. He worked in the crew, so the foremen were OK with it. There were other kids there as well. It wasn’t a huge company, just a small rancher.

When they paid by the hour us kids couldn’t work. If they were paid by the hour and farmworkers were slow, the foreman would send them home and not let them work anymore. They would only let kids work if they were doing piece rate. We were actually really slow because we were only in third or fourth grade.

When we got older, we did get more money. We got to earn our own money because before then my mother would take everything we earned. As we got older we had more interest in money, so we would keep half of it.

My first paycheck was $40. I was crying because I counted my boxes that day and I knew how much I had earned that week. When the foreman gave me my pay he said I didn’t work. I was in fourth grade. I was crying because I had worked and really wanted my money. I wanted to buy something with it. Finally he paid me my money in a white envelope.

To this day I can’t do the same amount of work as any other worker. Not even close. I would change from job to job, so I didn’t get as much experience as they did. When I went to the strawberries last week I did 27 boxes and the others did 50 boxes, so it’s not even close. The foremen don’t really care because they pay by the box. 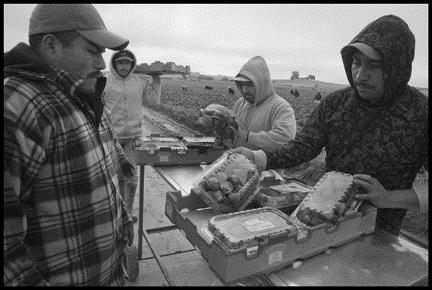 Strawberry workers take the boxes they’ve picked to the checker, who checks the quality of the berries, weighs them, and punches the ticket that keeps a record of their work and how much they’ll be paid.

I felt discrimination, not so much because I’m from an immigrant family, but because I’m indigenous. The first time I was in second grade and kids would call us Oaxaca. Apparently that’s a bad thing, because they would think of us as beneath them. Even in the fields. For example one foreman divided the Oaxaqueños and the Mexicans. He put the Oaxaqueños in the bad fields and the Mexicans in the fields with no weeds.

Everywhere we went — the welfare office, the hospital — we were always discriminated against for being indigenous. It was their attitude — not willing to assist us. The Spanish-speaking and English-speaking would get more information, because they couldn’t communicate with us. I always thought there was a law out there against discrimination, but it seems it is just not enforced.

I wish farmworkers were able to get overtime. You only start to get overtime after ten hours. I was pretty upset when I heard that. When they’re not following regulations, I always get frustrated. When I worked in the tomatoes recently they stole four boxes and I was so upset. I told my family to report it to the Labor Department. To them it’s inevitable, though. They think we should just put up with it and be grateful that we have a job. It’s also fear of losing their job if they make a complaint. That’s pretty much how it is. Other people would make fun of my dad because he would fight for his rights. They’d mock me and say, “That is why your dad never gets jobs.”

But I think it’s possible to change things, which I get from my heroes and earlier activists, like Gandhi and Martin Luther King. I became an activist after having to leave home because I am bi-sexual. My family was very conservative and for them my sexuality is a sin. I couldn’t do anything and I felt trapped. I couldn’t live like that so I went to live with my dad. But it didn’t go like I expected it to and he too blamed me for being bi-sexual and so I was homeless for three months. Eventually, I reconciled with my family and the expericence made me want to continue to be an activis. I plan to always be an activist. My friends see me like the hippie one, I guess because I complain about how people are treated unfairly in other countries and here in the United States. I have other friends that are activists like me and also fight for fairness and equality and education. Together we can make a difference. 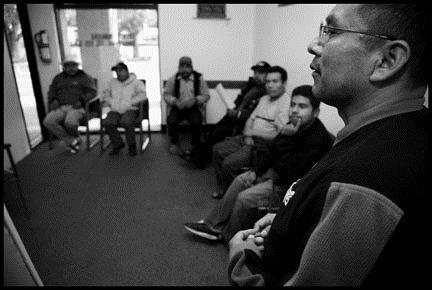 Migrants conduct a meeting of their hometown committee.