The Story of Ramona

Ramona was a farm worker for many years, and her husband still works in the fields. Today she is in charge of the sexual assault and human trafficking program for Lideres Campesina, a farmworker women’s rights group.

I worked in the fields for fifteen years, and my husband still works in the fields. My experience as a farm worker here was both wonderful and difficult. It was hard because I didn’t have any experience that prepared me for that work. But it was also a wonderful experience, because I learned a lot that I was able to take back to my daughters. 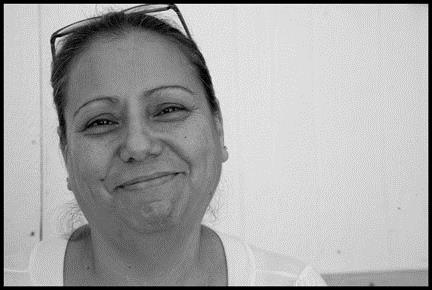 I never did either because the handkerchief made me feel like I was suffocating and it was too hot to wear a long sleeved shirt. I did wear a handkerchief on my head, but that’s it. I recently had asthma, and I think it was because of the pesticides. I didn’t have it when I was working in the fields — not until later. But we know that there are some pesticides that cause you to have a reaction immediately after ingesting them and others whose effects don’t show up till later. 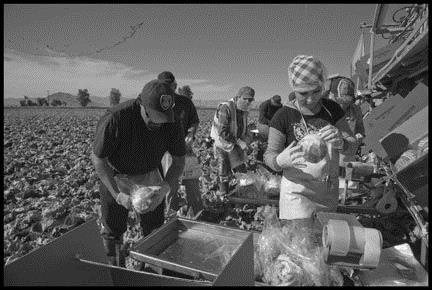 A young woman puts a head of organic lettuce into a plastic bag and twirls it closed, working behind a lettuce machine.

Many workers have problems with their skin. My husband’s aunt had a reaction to the pesticides and now has dark spots on her skin. First she had a rash that she scratched and then it turned into dark spots that she still has on her hands. My hands got so swollen that my skin began to split. First they swelled up, and then they got extremely dry. My skin would start to crack, and it was extremely painful. I never went to the doctor because I couldn’t afford to, but I think it was the constant motions my hands were making — grabbing such large heads of lettuce all day long. There were also chemicals in the lettuce.

When I picked lettuce, there was a lot of water on the lettuce. The fields were muddy. I remember it was very cold and everything was frozen in the morning. We had to wait beside the field until later in the day before we could start work. We would drive a very long distance at four in the morning, but then we had to wait around until ten or eleven. Once the sun had warmed the field and the ice melted we could start work.

Considering all the difficulties involved with doing this type of work, I don’t think we’re paid a fair wage. Unfortunately the law sets a very low minimum wage. I hope others see our problem, because it is so underpaid and such difficult work. I know we work here because we don’t have an education, but I think we should be earning more.

There are many consequences because the wages are so low. Workers have to pay rent, pay for the babysitter and their ride, buy food and if they can, health insurance. Medical insurance is so expensive here. A simple prescription will run you $100. Because the money isn’t enough people have to ask others for loans. We live a stressful life because all of this work is temporary. When the work runs out, many of us don’t have unemployment benefits. So when the work ends the stress begins. It’s frustrating, because you don’t have a job or unemployment benefits, but the kids are sick, you have to pay the rent and the bills are piling up.

But farm work what we live off of. It’s important that others recognize this type of work. It has dignity, because it’s a difficult but honest job. Not every person can do this type of work. I don’t think it’s right to look down on this work. Anyone with a conscience understands that’s wrong and realizes that this type of work should be recognized. I’m not saying we should have a banner put up in our honor, but Cesar Chavez worked hard for the rights of workers and I would hope that others respect how difficult it is.

I would love to work alongside those people that don’t value this work, because it is such hard work. When I first started working, and my hands got so swollen and cracked, I remember telling my husband that I didn’t want to go back to work. We were picking lettuce. I was packing – I’d put the head of lettuce in a plastic bag, twirl it around, clip the bag and put it in a box. We were following the machine, pulling empty boxes from it, and then lifting them back up once they were full. We were working in 110 to 115 degree heat. 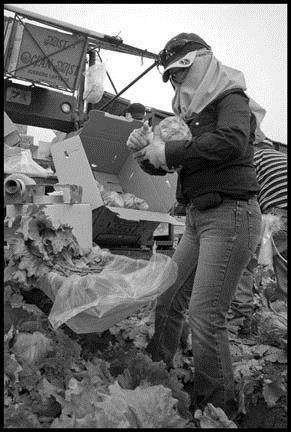 A woman packs lettuce behind the machine.

Not just anyone can do this job. I stayed there because I didn’t know how to do anything else. I didn’t have an education. I only received an elementary education once I was an adult, and graduated from an adult school in Mexicali. I wanted to continue attending school, but I couldn’t because my mother was very poor and couldn’t afford it. I didn’t have any other option. I think most workers in the lettuce field with me were in my same shoes. They didn’t have an education. In this country, in order to have a good job, you must speak English and have other skills.

Today I’m the assistant coordinator of the sexual assault and human trafficking program of Lideres Campesinas. There are specific problems that women have working in the fields. At work they face sexual harassment. At home they suffer from domestic violence. Some women have been assaulted by their husband, or their father, or their neighbor. We’ve seen many different situations in which they’re abused.

Ramona and a colleague planning an outreach to local farmworker women.

Domestic violence is the primary problem but the woman is always afraid to speak up and say that her husband hits her, is an alcoholic, and doesn’t give her money for food. She doesn’t want to say anything out of fear that she’ll have her children taken away. It’s taboo to speak about it. We’ve been trying to educate women and encourage them to exercise their rights and familiarize themselves with agencies that can help. They can help themselves with a visa available to immigrant women who suffer abuse at the hands of a legal resident or citizen. But they’re not going to admit their husband beats them on the first visit. It takes a long time to convince them to take these steps.

The visa is important because it first grants you a work permit. It’s a long process, but you can begin if you have proof of your situation, be it a police report, restraining order or witnesses. If I don’t know for sure, but I think that if it weren’t for this visa it would be more difficult to convince them to come forward. This visa helps them think that they can survive on their own. Without it, they would probably think, “Are you going to support me?” Women need the ability to work here legally and not have to ask anybody for a handout.