The Story of Lucrecia

Lucrecia comes from Oaxaca, and speaks Mixteco, one of the indigenous languages and cultures of Mexico. Because of her age and bad health, she no longer works as a farm worker. But she spent the majority her life working in strawberry fields here in the United States.

I came here because people said money was literally for the taking, but it wasn’t true. It was hard to find work. When first began to work, I earned $80 a week in those days. It was difficult to find a place to live. We lived in a small trailer that was rented by many of us, so we literally slept side by side. We would bathe outside, wherever we could find water.

We struggled a lot, because we didn’t have food and lived out of our old car in the orchards where we were working. I earned $7 a day then, but was charged $3 for rent and 50 cents for drinks. We cut asparagus in bunches of 32 and placed them in boxes. If the boxes weren’t the required weight, they told us to do them again. They hardly paid us anything. 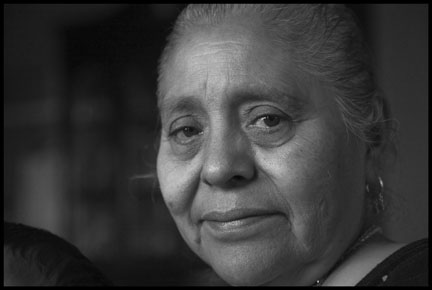 I’ve always worked the strawberry harvest. I’d finish that in July and go to work the jalapeño peppers, bell peppers and cherry tomatoes, in July. I brought my oldest daughter and son with me, and the three of us worked there. They would get out of school in June and worked July and August with me to earn money for their school clothes. They went back to school the 15th of September, so they worked with me 40 days. I would bring them back to start school, which is why I couldn’t just leave my other apartment. I’d pay $775 rent for my children to stay near their school and then $600 for myself in another town where I was working. I never had any money left after that, but I had to do it.

When I lived without the kids, I was in a large room that was divided into smaller rooms. It had a stove and outdoor bathroom. We were paid piecrate, not by the hour. They paid 80 cents for a bucket of jalapeños. Jalapeños with the stem were paid at $1.10 a bucket. I was able to fill 38 to 40 a day. I’d get back to my children in the middle of November, rest a bit, and then start the strawberry harvest again in January. I worked a long time in away from the children, starting in 1985. It’s been six to eight years that I haven’ gone. I couldn’t find housing one year, and after that they wouldn’t hire me anymore.

In the strawberries they also paid piecerate in April, May and June. The other months they paid by the hour. When I first started, it was $3 an hour, and the piecerate was eighty cents a box. The year before last I was paid $8.25 an hour. The regular box rate was $1.25, the little box was $1 and the two-pound box was $1.50. If I was able to fill 40 boxes, it was a good day. The younger faster men can pick 70 or 80 boxes a day. 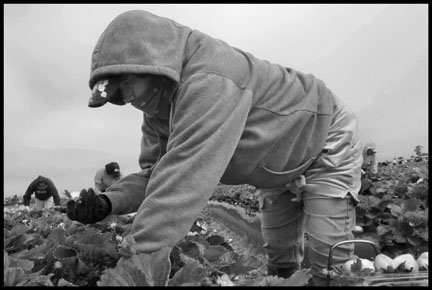 The strawberry harvest looks easy enough, but once you try it, it’s hard. I don’t wish that kind of work on my worst enemy. When you’re young, you work hard and get tired, but once you get home and take a shower you’re fine. Now that I’m old, I deal with arthritis and osteoporosis. My feet hurt and they swell. Many workers have been permanently injured. I have a nephew who hurt his back working in the strawberries, and a cousin who died of pneumonia because we work in the mud when it’s raining.

In the strawberries my food was always cold. If I was lucky enough to have a thermos, I could keep my food warm, but if I didn’t, then I ate my lunch cold. The lunch truck would show up at the field, but if I didn’t have money I couldn’t buy anything. We ate bean, potato and egg tacos. No beef or chicken. We couldn’t afford to buy meat. At times we ate vegetables from the fields that had been sprayed with pesticides. We just washed them and ate them anyway. When I was working in the pepper harvest, I would make delicious salsas for my potato and egg tacos. 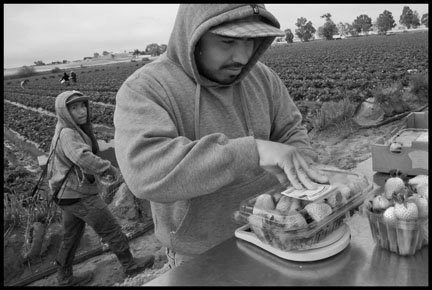 A checker weighs a basket of straawberries to see if he will credit the picker for the box.

The fruit that brings the most money here is the strawberry crop, but they pay us a wage that barely allows us to make a living. Then they turn around and sell each box of strawberries for $18 or $20. If we pick eighty boxes, how much do you think they make from that? You’d think the owners would have enough money to pay workers higher wages, but they pay it to the foreman instead. The foreman has a brand new car every year and the worker doesn’t get anything. Every year I see foremen driving around in those brand new cars and I ask myself why.

The foremen now choose workers who can pick 100 to 130 boxes per day. I know one who only hires immigrants without papers because she says legal residents complain too much. They tell the ones without papers they’re going to call immigration officials or fire them if they complain. These workers try and stay on the foreman’s good side by bringing her homemade tortillas, mole and even Chinese food. I’m not going to bring her anything, I don’t get paid enough. I’m able to get unemployment benefits, but people without papers can only work more.

If the foreman doesn’t like you, he makes you redo the work. In the strawberry fields you’re always worried that the foreman is going to send you back and tell you to redo your box because it’s not full enough. In the morning as soon as I get to the field, I pick four boxes so that I can have extras in case they tell me I have to redo some of the boxes during the day.

It’s always based on if they like you or not. We just have to put our heads down and work quietly. There were many times I stayed quiet and didn’t defend a fellow co-worker, but one time I did speak up. I had a woman foreman who spoke to us disrespectfully. When I asked her why she told me to give her my tools and fired me. I told her I didn’t understand why I was being treated that way, but the other foreman grabbed me by the arm and told me to leave.

Our work and life is hard here, and we don’t see many benefits. When the cost of living was low, our wages were low. When our wages went up, it was only because of the increased cost of living. Have you seen the current gas prices? Before we had to work an hour to cover our cost of gas, and now we have to work two hours. We don’t have anything left. The more we earn, the more they take away. We can’t move forward.

If you want to get ahead here, you have to live in cramped quarters. Here, the rich even have rooms for their pets, but we have no room for ourselves. When we first moved here, there were about twenty people living in this house. Now that my kids have moved on, there are ten now. We needed to share the cost of rent as much as we could. 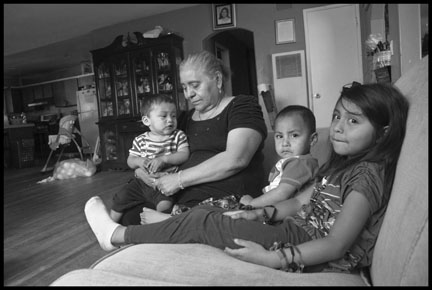 Lucrecia and her grandchildren.

I tell my kids how much I’ve struggled. When I worked the strawberry harvest, if I didn’t work fast I was fired immediately. I’m old now, so the last four years I was told I worked too slowly. But it’s difficult to work in the rain and mud. At times you’re lucky and find a good foreman who gives you waterproof ponchos. Other places charge for them, twenty-five dollars for ponchos and twenty-five dollars for rain boots.

All my life I’ve worked in the fields, but the work is harder for me now. I felt so strong when I was younger. I could work 24 hours. I don’t know if it’s old age or my diabetes, but I work a lot slower now. The machine in the strawberry fields goes very fast and it’s frustrating to get left behind. I can’t fill the amount of boxes I used to. I feel nauseas and get headaches.

They won’t give me a job anymore. If the foreman doesn’t like you, then you aren’t hired. They always choose the pretty women and family members first. As a woman working in the fields, if you didn’t have a good foreman, you were treated badly. You had to ask for permission to take a day off, but you were given a ticket. After accumulating three tickets, you were fired.

I’ve also heard complaints by other farmworker women of being sexually harrassed. Sometimes women don’t want to speak up. There are a lot who have lived through it, but are afraid to say something for fear that they’ll be reported to immigration officials.

When I was young, I had a foreman who always sought out women to be alone with. He told me he liked me, but I told him I knew he had a wife and mistress. He told me that if I let him do what he wanted to me, I would still have a job. If not, I needed to look for another job. I told him he would not see me there the next morning. Some of us women don’t take that kind of abuse, but many do what they feel necessary to keep their jobs, even if it means being in the hands of the foreman. My daughter tells me of her factory job and how that still happens there. The women that let the foremen do what they want move up in position. Those that don’t stay in their same position.

We need someone to help us and provide us with support. There are only a few of us in Lideres Campesinas,(a farLuworker women’s rights group). If I had a hidden camera, it would be so easy to show others what we face. Without that people don’t believe what we’re saying. When I worked in a plastics factory, a coworker had a doctor’s note saying she needed to work in a sitting position. The foreman fired her and then fired me for speaking up and defending her. I think a union would help, but it’s been difficult for one to get organized in the area. When I began to wear my Lideres Campesinas tee shirt, I was told there wasn’t work for me anymore. I’ve been working here for many years and all of a sudden there wasn’t work for me. I’ve been looking for work ever since.

When I came here I didn’t expect a better life. I knew I would have to earn my living with physical labor. I have the basics and I thank this country for giving me that. . The only thing I’ll have is the aches and pains, because it’s not like I have any money for all the work I did.