The Story of Raymundo

Raymundo is a young farm worker from Oaxaca. He and his friend are the world’s first Mixteco rappers.

I started working in the fields on the weekends with my parents when I was about eight or ten years old. During the summer we would go to Oregon in the summer to pick blueberries, strawberries, raspberries and blackberries. I have some good memories of those times because I was working with my family and the people from my hometown and we all got along well.

But it was not great when the sun beat down hard and we’d leave work really tired. We earned only a little money and we couldn’t enjoy it because we got home so tired. It was only enough for the rent. My mother took us to work in the fields because she needed us to help her.
Many of my classmates were also working in the fields during the weekends and summers, because it was the only work they could do. We would talk about how hard the job was, how hot it was out in the fields and how much we’d been able to do. I didn’t really like to work in the fields when I was in school. 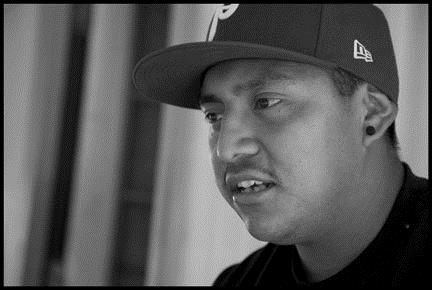 I was the first in my family to graduate from high school. My mother was so proud that she threw me a party. It felt good to stand on stage and hear my name being called. I felt sad immediately afterwards, though, because I didn’t know what to do with my diploma. I didn’t know where to go. I wanted to go to college, but everyone told me I had to pay for everything. I spent the money from my little wages to apply for scholarship but I never received one so I couldn’t go. I have been working in the fields since I finished school three years ago.

I have worked every crop I could get work in. The hardest thing about the grapes is the heat. Sometimes it’s so hot I get dizzy. When you try to get away from it, and go into the shade under the vines, the little flies or gnats come swarming at you. They get onto your skin and hair, and even fly into your nose and mouth. Picking strawberries is really hard too. Your back and knees hurt a lot, because you have to work bent over so much. The first day you’re out there you can hardly get through it. When you get home you say to yourself you’ll never go back. But then you need the money. So the next morning you talk yourself into going back out, even though it hurts. You do it because you have to.

Sometimes you have a foreman who’s OK. But sometimes when it’s really hot and you want to stop working, the foreman will make you work an extra hour in the heat. They’ll push you really hard – it’s like they think they own the field. People are often afraid, especially if they don’t have papers, so they don’t say anything about it.

I’m going to be a rap star. I think I’m going to be big, but I’m going to be a rapper with a conscience. My idol is Tupac Shakur. He was a rapper that spoke about politics. He told the truth and had good advice. He spoke about all of us kids in poverty. He talked about our lives. It’s like Tupac used to say, we’re a flower that grew in concrete. You can see the rose and stem is twisted, but it grew out of the hard concrete. We’re from the hood but we’re going to come up. Some people may not want us to achieve much, but we’re human too.

Many of my friends talk about returning to Oaxaca. If I go, I can’t return in the passenger seat of a car. I have to come back in a car trunk or walking through the desert. If they pass immigration reform, I’ll be forever grateful. This would be a dream for those of us who are undocumented and have graduated from school. It’s so sad to graduate and not be able to do anything with your education. It’s like accomplishing something so big, and then everything comes crashing down. It’s very depressing. I don’t want to be rich, but I don’t want to worry about what I’m going to eat tomorrow. I don’t want to worry about that. I want to live, not just survive. We have to move forward. If they pass a law that includes farmworkers we can do big things for the United States. 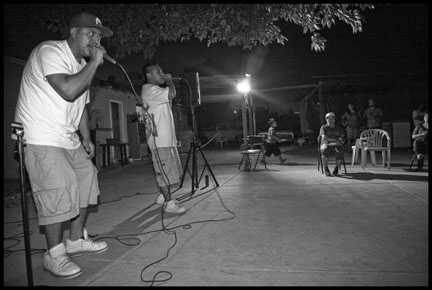