The United States currently has two guestworker programs for temporary work lasting less than a year: the H-2A program, for temporary agricultural work, and the H-2B program, for temporary nonagricultural work. These programs allow employers to obtain permission to hire foreign workers on temporary visas after engaging in recruitment in the U.S. and promising to meet certain requirements regarding recruitment, wages and/or working conditions. Each program imposes on foreign workers a temporary, non-immigrant status that ties workers to particular employers and makes their ability to obtain a visa dependent on the willingness of the employer to make a request to the U.S. government. History has shown us 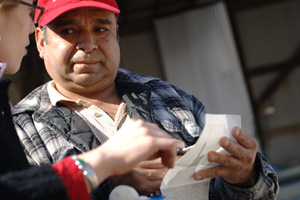 that foreign guestworkers who hold restricted status in the U.S. are vulnerable to workplace abuses. Even when Congress and federal agencies have sought to impose substantial labor law requirements on employers of guestworkers, the protections have often been meaningless because the workers are unable to enforce the law or are unwilling to attempt to enforce the law for fear of retaliation. For more information on the H-2 guestworker programs, please go to our Resource Center.

During World War II, Congress responded to growers’ worries about a shortage of agricultural workers by approving the temporary entry of migrants from impoverished rural areas in Mexico. The Bracero Program became the largest guest worker program in US history, employing more than four million Mexican workers over its 22-year history. The program was controversial; some argued that the low wages at which migrants were willing to work threatened the jobs of domestic farmworkers. Though rules were in place to protect both migrants and domestic workers (such as guaranteed minimum wage and “humane treatment”) many employers ignored them, using braceros simply as a source of low-paid labor. The program became notorious for abuse and exploitation as well as the indignities of racism and discrimination inflicted upon the workers.

The Bracero Program was finally abolished in 1964, in response to pressure from labor unions and religious organizations. For more information on the Bracero Program, please see our Resource Center.