Farmworkers in the U.S.: A transnational issue
Agricultural workers in the United States have been a transnational labor force for centuries. Presently, America’s farmworkers are predominantly an international labor force. Most migrant and seasonal farmworkers are immigrants, the majority from Mexico including a growing majority of indigenous people who do not speak Spanish, but also Guatemala, Honduras, Jamaica, and Peru. American agriculture is more and more a global business. The U.S. Government uses taxpayer monies to help America’s farmers sell their products abroad. Growers’ demands for foreign markets have significantly affected negotiations over the North American Free Trade Agreement, the World Trade Organization and other trade regimes 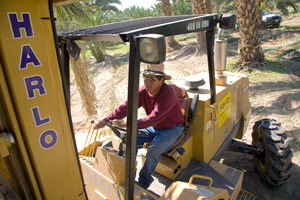 Labor Issues in International Trade Laws
Increasingly, international trade negotiations confront labor issues. The North American Agreement on Labor Cooperation (NAALC), also known as the “NAFTA labor side agreement” is an example of an international labor rights regime. With globalization and the migration across borders of tens of millions of people around the world, countries are increasingly looking to international labor standards, including those of the International Labor Organization (a unit of the United Nations).

Confronting Human Trafficking
Moreover, the substantial increase in policymakers’ interest in “human trafficking” relates directly to the immigrant farmworker experience. Between one-third and one-half of farmworkers in the U.S. are hired by growers through “farm labor contractors” or other labor intermediaries. Human trafficking violations against farmworkers most often occur when workers are either coerced into working for a labor contractor, experience wage deductions that create a situation of indentured servitude,or workers are physically prevented from leaving the premises of the farm and/or their travel documentation is taken away from them. Federal labor trafficking laws prohibit the procurement and exploitation of a person for labor through the use of force, fraud, or coercion

Many growers deny that they “employ” any of the workers in their fields and disclaim liability for violations of labor rights, immigration laws and criminal laws against slavery and peonage. Farmworker Justice has been a leader in domestic efforts to reduce abuses under labor contracting by forcing growers to accept responsibility as “joint employers” of the workers along with the contractors. We also have been engaged in such work at the international level.

Explore some of our major international labor rights efforts below:

A few years ago Farmworker Justice sponsored two symposia on the history of foreign contract labor systems. The first, held in October 2005, focused on guestworker programs in the United States. The second, held jointly with Oxfam America in March 2006, examined guestworker programs in Western Europe and Canada. Several Congressional proposals on immigration policy would create new guestworker programs or expand existing ones to address the presence of undocumented workers in this country and to regulate future migration. In some proposals, legislators would grant a guestworker status based on a temporary, nonimmigrant work visa, while others advocate a permanent immigration status and path to citizenship. These policy choices raise fundamental questions about the political and economic freedoms held by people who live and work in the United States. The experts gathered at these symposia provided attendees with essential information about guestworker programs in the United States and other developed countries to help conference attendees evaluate legislative proposals and devise their own policy suggestions.

The brief survey of foreign contract labor systems revealed valuable lessons that should inform current discussions about new guestworker programs. The conferences demonstrated the vulnerability of the foreign workers who hold restricted nonimmigrant status. Even when government agencies have sought to impose substantial labor law requirements on employers of guestworkers, the protections have often been meaningless because the workers are unable to enforce the law or are unwilling to attempt to enforce the law for fear of losing their job or not being called back in a future year. Co-sponsors of the events were the AFL-CIO, National Council of La Raza, Service Employees International Union, and the Southern Poverty Law Center. The symposia were also supported financially by The California Endowment, the Evelyn and Walter Haas, Jr. Fund and the Rosenberg Foundation

The Commission for Labor Cooperation is an international organization created under the North American Agreement on Labor Cooperation (NAALC), which is the “labor side agreement” to the North American Free Trade Agreement (NAFTA). The Commission comprises a Council of Ministers, a cabinet-level body in charge of policy-setting and decision-making consisting of the three nations’ labor ministers; and a tri-national Secretariat that conducts research and provides other support to the Council. The Commission works in close cooperation with the National Administrative Offices (NAOs), created by each government within their own labor ministry to implement the NAALC. In February 2003, Farmworker Justice filed a petition with the Mexican NAO asking the Commission to address the mistreatment of H-2A guestworkers from Mexico employed in North Carolina agriculture. The NAALC obligates each of the three NAFTA countries to comply with its own labor laws. The farmworkers‘ rights under this program were routinely violated in North Carolina. The NAALC also obligates each nation to provide “migrant workers” with the same labor law rights as other workers in the country. Yet the federal Migrant and Seasonal Agricultural Worker Protection Act excludes the migrating H-2A guestworkers from coverage of this important employment law. FJ submitted the petition jointly with the Central Independiente de Obreros Agrícolas y Campesinos (CIOAC, or Independent Union of Agricultural Workers and Peasants), an organization based in Mexico City.

The Commission for Labor Cooperation webpage also includes a number of reports and studies about labor protections and rights in North America, including Protection of Migrant Agricultural Workers in Canada, Mexico and the United States Other reports can be found on the NAALC website.

Convention on Safety and Health in Agriculture

The ILO recognized that agricultural employment ranks among the three most dangerous occupations in the world and that many governments fail to take effective action to prevent injuries and illness among farmworkers. Indeed, national laws, including in the United States, routinely exclude agricultural workers from the minimum occupational safety and health protections applicable to other occupations.

The new Convention’s standards are modest but, if they were followed in the United States, could lead to important improvements in employer practices and government policies, which would save lives and reduce injury and disease among agricultural workers in the U.S. and elsewhere. An ILO Convention is not binding on a country unless it’s government ratifies it; the U.S. Congress has not ratified this Convention (and rarely ratifies ILO Conventions).

Under this Convention, a ratifying nation must “formulate, carry out and periodically review a coherent national policy on safety and health in agriculture.” The national policy objective shall be “preventing accidents and injury to health arising out of, linked with, or occurring in the course of work, by eliminating, minimizing or controlling hazards in the agricultural working environment.”

A ratifying nation’s laws and regulations must require employers to: (a) carry out risk assessments, adopt preventive and protective measures, and comply with applicable standards; (b) provide to workers “adequate and appropriate training and comprehensible instructions on safety and health,” including information on the specific hazards at the workplace, “taking into account their level of education and differences in language;” and (c) immediately cease operations and evacuate workers where there is an imminent and serious danger to safety and health.

Workers are entitled to several types of government programs and activities and to certain standards of treatment by employers. In addition, Article 8 states that workers in agriculture shall have the right: (a) to be informed and consulted on safety and health matters; (b) to participate in the application and review of safety and health measures and, in accordance with national law and practice, to select safety and health representatives and (c) to remove themselves from imminent and serious risk of harm at work without suffering retaliation.. The Convention also promotes recognition of labor unions and collective bargaining in the agricultural sector, where government policy often hinders workers from organizing unions. The ILO’s tripartite system of representation from governments, employers and employees requires that labor unions play a major role. Full articles of the Safety and Health in Agriculture Convention (2001) available here

In April 2005, FJ Executive Director Bruce Goldstein participated in a roundtable discussion at the ILO in Geneva, Switzerland entitled “Merchants of Labour: Policy Dialogue on the Agents of International Labour Migration.” Participants included government officials from sending and receiving countries, labor advocates, academics, and an international labor contractor. The ILO’s International Institute for Labour Studies compiled the papers presented at the meeting into a book, Merchants of Labour. The book includes Bruce Goldstein’s paper, “‘Merchants of Labour’ in Three Centuries: Lessons from History for Reforming 21st Century Exploitation of Migrant Labour,” about the history of attempting to reform labor contracting.