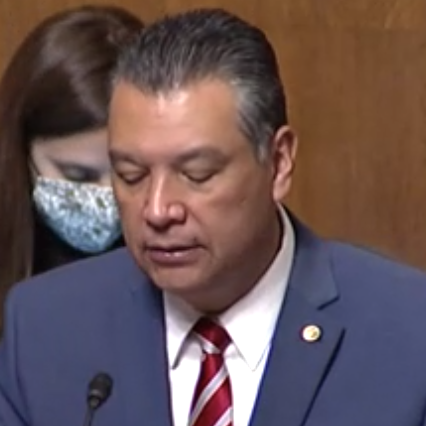 FJ President Bruce Goldstein testified before  the Senate Judiciary Committee’s Subcommittee on Immigration, Citizenship, and Border Safety on Wednesday, May 12, 2021…

The hearing, “The Essential Role of Immigrant Workers in America,” was convened by Subcommittee Chair Alex Padilla (D-CA). It highlighted the invaluable contributions of immigrant essential workers throughout the pandemic and the need to pass pending immigration reform legislation, including the Citizenship for Essential Workers Act (S. 747), the Farm Workforce Modernization Act (H.R. 1603), and the U.S. Citizenship Act of 2021 (S.348).

Each bill would recognize the vital contributions of immigrant workers by creating a pathway to citizenship.

You can read Bruce Goldstein’s written testimony or watch his oral testimony here.  Excerpts of his testimony are below:

“An estimated 2.4 million farmworkers labor on the nation’s farms and ranches. The vast majority are immigrants and at least one-half are undocumented. Nearly 30% are women, and an estimated 4 out of 5 are Latino. Most have been living and working in the U.S. for more than 15 years. They are vital members of our communities”

“I think we all remember the widespread fear of food shortages last year as grocery store shelves went bare. People who had never struggled to purchase food suddenly feared they wouldn’t be able to feed their families.”

“In response, the government designated farmworkers as essential workers. As other businesses shut down or shifted to telework, farmworkers were told to keep going to work, in person, on the nation’s farms and ranches.Why? Because strawberries cannot be harvested — and cows cannot be milked — over Zoom.”

“The broken immigration system intensified the pandemic’s harms for undocumented farmworkers and their families.  Undocumented immigrants are ineligible for most of the public benefits created to confront the pandemic.  They often work in fear that they will be fired in retaliation for requesting safety precautions.  Many undocumented farmworkers are reluctant to get tested, fearing that a positive result could cost them their job — or that immigration enforcement agents might arrest them at a testing or vaccination site and separate them from their children.”

“The pandemic confirmed that immigrant farmworkers – many of them undocumented  – are essential to our food system and our nation’s stability.  They have labored through the pandemic to feed us and many have suffered greatly.  In return, they deserve a greater measure of justice from our Government through: more effective responses to the pandemic, ending discriminatory labor laws, and reforming the immigration system to grant undocumented farmworkers and their families an opportunity to obtain immigration status and citizenship.