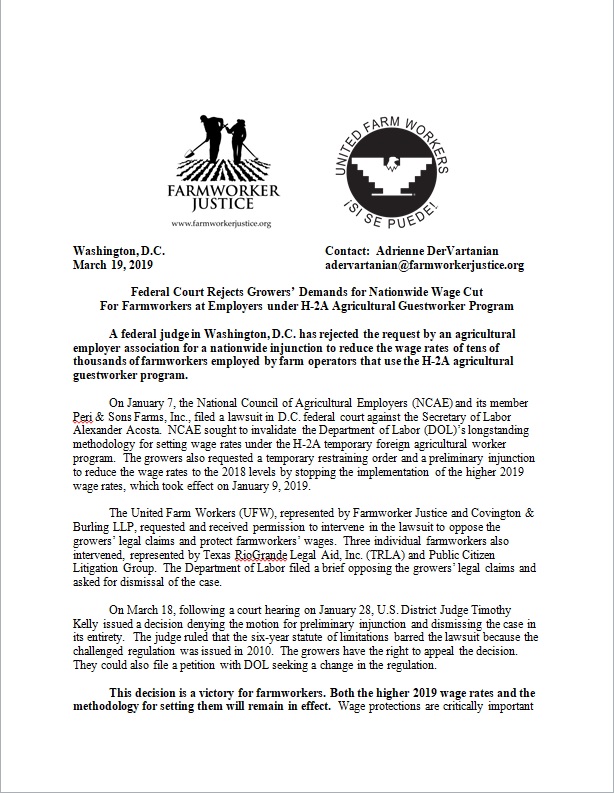 A federal judge in Washington, D.C. has rejected the request by an agricultural employer association for a nationwide injunction to reduce the wage rates of tens of thousands of farmworkers employed by farm operators that use the H-2A agricultural guestworker program.

On January 7, the National Council of Agricultural Employers (NCAE) and its member Peri & Sons Farms, Inc., filed a lawsuit in D.C. federal court against the Secretary of Labor Alexander Acosta.  NCAE sought to invalidate the Department of Labor (DOL)’s longstanding methodology for setting wage rates under the H-2A temporary foreign agricultural worker program. The growers also requested a temporary restraining order and a preliminary injunction to reduce the wage rates to the 2018 levels by stopping the implementation of the higher 2019 wage rates, which took effect on January 9, 2019.

On March 18, following a court hearing on January 28, U.S. District Judge Timothy Kelly issued a decision denying the motion for preliminary injunction and dismissing the case in its entirety.  The judge ruled that the six-year statute of limitations barred the lawsuit because the challenged regulation was issued in 2010. The growers have the right to appeal the decision. They could also file a petition with DOL seeking a change in the regulation.

This decision is a victory for farmworkers. Both the higher 2019 wage rates and the methodology for setting them will remain in effect.  Wage protections are critically important for safeguarding the jobs and wages of domestic farmworkers when employers are permitted to hire temporary workers from foreign countries. Employers under the rapidly-expanding H-2A program obtained approval to hire 242,000 seasonal foreign workers during fiscal year 2018.

“The growers’ arguments in this case were based on their view that wages of farmworkers in the U.S. are too high, not on any valid legal claim.  The H-2A program requires employers to offer market-rate wages before being allowed to hire foreign workers based on a claim of a labor shortage.  Farmworkers’ wages are not too high; many farmworkers’ wages and working conditions are utterly inadequate. The law does not and should not guarantee agricultural employers access to unlimited numbers of vulnerable foreign workers at substandard wage rates,” said Bruce Goldstein, President of Farmworker Justice, co-counsel for the United Farm Workers. “We are pleased that the judge dismissed this lawsuit,” he added.

“Farm workers, who are already among the lowest-paid workers in the nation, should be paid more, not less,” said Teresa Romero, President of the United Farm Workers. “The pay freeze as demanded in the suit filed by the National Council of Agricultural Employers would have put the lives of guest workers in serious peril and would have dragged down wages for domestic U.S. farm workers laboring alongside H-2A guest workers. We are elated to claim this dismissal as a victory for all farm workers.”

The H-2A temporary foreign agricultural worker program allows agricultural employers to hire foreign citizens on temporary work visas to perform seasonal jobs.  There is no limit on the number of H-2A visas issued each year. The law prohibits employers from causing “adverse effects” on the wages and working conditions of similarly employed U.S. workers.  To prevent displacement and undermining of wages of U.S. workers, employers must offer and pay the highest of several wage rates. One of those wage rates – the one at issue in the lawsuit — is called the Adverse Effect Wage Rate (AEWR).  It is a form of prevailing wage.

By longstanding regulation, DOL sets the AEWRs for each state based on the regional average hourly wage rates of nonsupervisory field and livestock workers combined, as determined by USDA surveys of employers in the prior year.  Wages vary by region and fluctuate up and down from year to year. As an average, wages have been increasing modestly in recent years. The national average of state AEWRs rose from $12.47 per hour in 2018 to $13.25 this year.

The NCAE argued that the H-2A wage rates are too high and are not an accurate estimate of the level needed to prevent adverse effects to U.S. workers’ wages.  However, the methodology merely adopts the reality of the labor market. Employers claiming an inability to find sufficient U.S. workers should offer at least the average wage in the market before being permitted to hire foreign workers who would be willing to accept lower wages. Moreover, the AEWR methodology has been the subject of extensive analysis during Labor Department rulemaking and litigation.

Farmworker Justice is a national advocacy and litigation organization based in Washington, D.C.  Covington & Burling is an international law firm providing its representation on a pro bono basis.