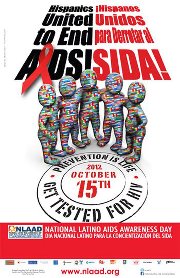 A letter from Ramon Ramierz, Chair of Board of Directors.  National Latino AIDS Awareness Day (NLAAD) was established in response to the impact of HIV and AIDS in the Hispanic/Latino communities and serves as a national community mobilization and social marketing campaign that unites Latinos in efforts to raise HIV awareness. This year’s theme “Hispanics United to End AIDS! Get tested for HIV” provides me, as the Chair of the Board of Directors of Farmworker Justice , an opportunity to reflect on the HIV/AIDS prevention work FJ has been engaged in since 1998 while also fortifying my personal commitment to seeing the end of the HIV/AIDS epidemic. We first began developing its HIV work after hosting a National Farmworker Women’s Conference where farmworker women identified HIV/AIDS as a serious concern in their lives. Seeing Farmworker Justice’s HIV programs expand to include coalition building for rural HIV prevention, community mobilization training, and capacity building assistance reassures me that we are working hard to address the health issues farmworker communities face.

HIV/AIDS is a serious concern for all communities and especially farmworker communities due to their limited access to health care. In comparison to other Latino groups and the U.S. population as a whole, migrant workers are at increased risk for this disease. Few farmworkers have employer-provided or government-subsidized health insurance. Additionally, language barriers, illiteracy and the difficulties of a highly-mobile lifestyle conspire to impede migrants' access to HIV prevention information and services.

It is my great honor to lead the Farmworker Justice Board and to support the work of the Health team at Farmworker Justice. Together, we can stop the spread of this epidemic. If you are one of the more than half of US adults that have never been tested for HIV, now is the time to get tested– for you, your family, and your community.